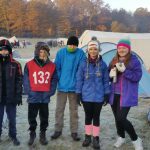 On Friday the 18th of November 2016, our team arrived at our part of the campsite. Claire & Lesley had very kindly put up our tents and the mess tent so that we could unpack straight away. After we had unpacked and ‘settled in’, we talked to some other people from different groups that we knew. After an hour or so of talking to other groups we went back into our mess tent to discuss what was happening the next day. We talked over the rules and timings and introduced ourselves to our new team member Charlie from 5th Letchworth. We had Charlie in our team so that we had enough people to compete instead of a team that goes and doesn’t get to compete against the other teams. Later, we started to head to bed as we had a long day ahead of us.

We woke up on the Saturday to find frost on our tent. We quickly put some more layers on and went to sit in the mess tent. We had bacon and egg or bacon rolls for breakfast. We had our orienteering session at nine so we headed out to start a couple of bases before. After a long discussion on what we were going to do we only had time to complete 1 base. We had to move the tyres from one side to another using three poles and you weren’t allowed to put a bigger tyre on top of a smaller one. We completed it within the time limit and we were told that we were one of the quickest to complete it so far.

We headed back to our camp to grab our orienteering equipment and headed to the base entrance. We had a quick brief on what to do and how long we had to do it and then we had as long as we needed to mark out where each checkpoint was. We managed to find 7 out of 14 posts in our time limit.

We dropped our things back off at the camp and had a quick snack and drink and headed off to complete some more bases. During the day, we completed 14 bases in total. Some of them included pulling a range rover to the line and pushing it back again. Another included a first aid base (we didn’t do the best at this one). You had to hand in your card that the base leaders ticked off the base you had completed on by 5 or points were deducted. Dinner was at 5. We had chicken and vegetable curry with naan bread. During the day, Leslie and Richard came to visit us and had dinner with us.

At 7:30 we started our night bases. We did 7 in total and some of them included getting all our team over a minibus in 10 minutes. We did another right at the end where we had to stack cans in the quickest time possible. After this base, we were all cold and wet so the explorers that were running the base invited us to sit down at the fire with them. We sat there for an hour talking to them and then at 10:45 we went back to camp. We went straight to bed after warming up a bit in the mess tent.

In the morning, we packed all our personal equipment up and put them on a tarpaulin then packed all the camp equipment and put it in Claire’s car. We had an hour spare so we went to where the end presentation was being held and played with a Frisbee. Millie got it stuck in a tree so we spent the rest of the time getting it out. Another group came and helped us and eventually josh managed to throw a stick in the air and knock it out of the tree. The ending ceremony lasted 20 or so minutes but we didn’t win anything.

It was a very cold and wet weekend but all in all a good one.