On Friday we arrived with our stuff and equipment, we had to load are equipment on to a trailer. We ha 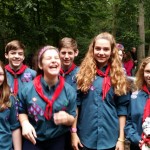 d to follow the trailer to where we would stay for the weekend there were 7 other born 2B plus teams which we had to compete against. Once we had put up our tents and dinning shelter we set out are beds and storage tent. Later that night we went to bed. All the girls had to snuggle in a three man tent because when we were putting up our tent we figured out it was broken so we all had to sleep in one.
The next morning we woke up about seven to begin are breakfast we had eggy bread and bacon. Once we had finish eating and cleaned up we had to make are axes and saw area and washing line for tea towels and anything that go wet we also had to begin are pioneering project it didn’t really go to plan but we still got lots of points. For lunch we had to cook it on a open fire all are teams had a really good fire going except for us who just couldn’t get it started we manage to make a little bit for the judges but the fire wasn’t going enough for us to have any so we just had crisps and a bar in the afternoon we had to go and do more pioneering with the other born 2B teams. We and another group had to make the ladder to the draw bridge whilst the rest did the frame once we had done the ladder it was attached to the rest of it then in are teams we had to pull up the draw bridge and back down again we managed to do it we were given its of points for this. Once we had finished the pioneering we went back to camp and had a bit of free time.
For dinner we cooked the burgers from lunch and had a few other things then it was the camp fire it was really cold but some groups did some funny things we sang ‘do u want to build a snowman’ but in our own words. After we went back to the camp and we had a great laugh in are tents. In the morning me, Rebecca and Georgia stayed in are tent until about eight we got the boys and Molly to cool breakfast. Once we had eaten breakfast and cleaned up we had an hour to clean up and pack away we just managed to tidy up in time. Once we were in full uniform it was time for the presentation we didn’t win but we still got lots of points. The team that won was a team of girls which have won before. Our SAS team won the best team work reward out of the other SAS teams which they had to compete against