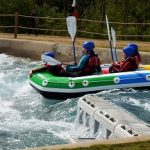 We went on our water sports camp at Gilwell Park. We had a lot of fun there! To get there we went on the mini bus and it took around 50 minutes. When we got there we unpacked our tents and got them sorted out, then once we had put the tents up we put the dining shelters up.

When we did our kayaking we all went out on the lake and we played some games on the water in our kayaks. The best game was when we had to walk across the kayaks on the water and try not to fall in – it was REALLY hard to keep your balance! The kayaks had holes in the bottom too and we all got absolutely soaked!

When we did crate stacking we got into pairs had two crates to stand on and the higher you got, the more wobbly it became … the winner got 14 crates which was the maximum possible!

In the evenings we had the usual delicious food which we made ourselves (with a bit of help from the leaders) and then had free time to explore the woods where we played Manhunt and 50-50 which was great!

White Water Rafting was definitely my favourite activity of the weekend – we did it on the 2012 Olympic course – the water filled up the raft and we tilted on our side, nearly tipping us in! Luckily the raft recovered so we carried on to the end and then did it all again – about 10 times!

Overall the weekend was one of my favourite camps so far – thank you Leaders for such a great camp – can’t wait until the next one!

I have really enjoyed my first scout camp. We has an amazing time camping at Gilwell, we slept there from Friday to Monday and did loads of fun activities. On Saturday we woke up early for kayaking we were split up into two groups. When we where kayaking we played loads of fun games in the water like which team could collect the most balls and we had to switch kayaks on the water. Millie almost fell in and ended up doing the splits in-between two kayaks. We then went back for such where we swapped with the other group to go and do create stacking. In create stacking Eva and Millie got the highest amount of crates. On Sunday we had to get up early because we had to be at white water rafting by 8:00am. Once we arrived at the white water rafting we got told the safety rules. We then gathered by one of the rafts to invest our newest member. Once we where on the rafts and in the rapids Millie fell in and our boat almost capsized. White water rafting was my favourite activity. In the evening we played rounders, had a talent show and then we played man hunt. In the morning we went to build rafts it was really fun even though our raft was quite unstable. Millie, Josh and Lewis all fell in the water. We then went back to pack up our tents and then we went back. I really enjoyed the scout camp!