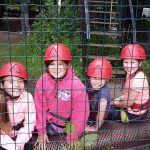 Arrived on Friday and we played games then we got shown to our tents, we had a hot dog before bed. Saturday morning we had breakfast which we had to be very quick because we had to ho to our first zone which was earth. We got to chose from rope a phobia, quad bike and a zip line. I chose rope a phobia.. We went to a different part of earth where we could do abseiling or laser tag. Most of the  girls went abseiling but me and one other went to do laser tag. Then we went to the air zone where there was loafs of inflatable things. I went on an inflatable helter skelter which was fun.Then me and three other people went to gladiators. One of them got knocked of the podium and then I was cornered and had to fight off two boys, but eventually I lost. My favourite part was on Sunday when we went to the water zone and I went zorbing, but it wasn’t on water. I also liked the spider mountain. Fantastic weekend but really missed Akela’s eggy bread! Get well soon Akela.. Thank you to all the leaders for a fab, fun filled weekend.